Amongst other things it [the Paris proletariat] throws itself into doctrinaire experiments, cooperative banks and workers’ associations, hence into a movement renouncing an overthrow of the old world by means of its own great resources, and instead seeks to attain its salvation behind society’s back, privately, within its own limited conditions of existence, and hence necessarily coming to naught. It seems unable to rediscover revolutionary prowess or to renew its energy from fresh alliances… [emphasis in the original]

It seems to me that in describing the feeble Paris proletariat, Marx was also critiquing a pattern wherein would-be political actors opt to build their own alternative projects from scratch instead of claiming and contesting existing structures, resources, social spaces, and cultures. That is to say they opt out of politics in favor of something far smaller; something that is consequential only to its self-selecting participants, and which can usually be ignored—perhaps not even noticed—by the rest of society and the existing power structures.

It is interesting to me that he names “cooperative banks and workers associations” specifically. I can imagine political potentials—not just cloistered alternatives—in such organizational forms. 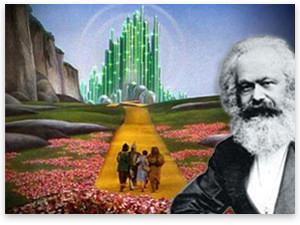 This reminds me of some of the radical buzz today about “prefigurative politics” — a concept that I find useful through a strategic communications lens in the context of political struggle, but which is far too often treated as an article of faith; as if the prefigurative act will magically, by itself, without a larger strategic framework, bring about the new society. The allure of such projects can be self-expressive to the point of self-indulgence. It is fueled by a purism that seeks to avoid messes; a feeble longing to construct a more controllable, less contaminated, albeit miniaturized, microcosm of one’s Utopian vision.

Also published in Occupy! #5. Occupy! is an OWS-inspired gazette, published by n+1.

In late October of last year my cousin came down to Liberty Square, then home of a thriving Occupy Wall Street, to meet me for a drink. He arrived early so he could check things out for himself. I was eager to hear his impressions.

“What stood out to me,” he told me at a bar around the corner, “was how you all are recreating society—or creating a microcosm of society. It’s all there: a kitchen, a medical tent, a security force, a public library, and a whole alternative decision-making structure. It’s fascinating!”

Much has been made about the prefigurative aspects of Occupy Wall Street and the occupy encampments across the country, when they existed. The camps, for example, served as more than just a protest, more than just a tactic. Participants consciously prefigured the kind of society that they were striving to build. It was indeed a compelling moment for my cousin—or for any stranger—to witness. In the two months of the physical occupation of Liberty Square, newcomers like him could walk in off the street and join our world—could even speak up during a General Assembly meeting if they felt so moved. Everyone’s participation was welcomed. A modified consensus decision-making process is used in the General Assembly and in working group meetings so that decisions have to take into account everyone’s input and ideas, thus prefiguring a kind of direct democracy lacking in the wider world, particularly in the realm of mainstream politics.

“I hope not!” I replied. END_OF_DOCUMENT_TOKEN_TO_BE_REPLACED

In utopianism and the would-be political group I explored a layer of utopianism within intense social change movements like Occupy Wall Street, and I suggested that the utopian drive in these situations may be at least as much about immediate participant experience as it is about an envisioned ideal future. That is to say the incarnated utopian space (e.g. Liberty Square) provides an integrated group identity that fills a lack for many core participants. The lack is caused at least partly by the fragmentation of modern existence — the dispersal of our identities across many spheres (e.g. workplace, family, religion, interest, hobby, neighborhood, etc.) and the accompanying anxiety caused by the necessary constant juggling of our selves. Who are we? Each of us contains many selves, many performances, each of which emerges in relation to different groups and circumstances. But those who can step fully into one single radically integrating identity are able to fill this lack and longing—even if temporarily—with an integrated sense of self and of belonging. Out of many identity fragments emerges a singularity: the revolutionary. And those who are unable to step in so fully can still experience this utopian space as representing the potential completion of their lack.

The potential problem with this arrangement is political. Because this utopian space is what fills our lack, the achievement of the space will likely be exalted over what the space achieves; the life of the group over the group’s capacity to act as a vehicle for change. The sense of utopia, as defined above, can be accomplished without ever having to actually win anything.

This is how a group’s internal processes can come to stand in for a strategy. Our tactics, ostensibly about moving forward a strategy or plan, become valued more for their self-expressive and group-benefiting capacities than for their instrumentality. What does this look like? In the real-life planning, processes, and actions of such a group? I will describe my observations from a planning meeting for an action. I believe that candid and descriptive discussion of this phenomenon is important, but it is also tricky. The point is not to single out particular individuals or groups, so I am omitting and changing some details and not naming individuals or the group itself.

The meeting started by jumping immediately into logistical matters. This was the group’s first large-group meeting to plan for the action, so it was not the case that a strategic stage had preceded and we were now in the logistical/implementation phase. Several minutes into logistical matters, it was mentioned that a smaller core had done some pre-planning and scouting of the action site. But they shared neither what they discussed nor any context they might have read. The word strategy was not mentioned, nor anything even vaguely resembling strategy. The goals of what the action might accomplish were never discussed. Instead we immediately launched into logistics. We discussed roles: medics, legal support, bail and jail support, sign-making, media, etc. There was a lot of emphasis on risk—on the levels of risk—and on logistical matters that kept that risk at the forefront of participants’ minds. Group members could choose between different levels of risk (of arrest and/or confrontation with police). The levels were represented by color codes, safest to riskiest: green, orange, red. The large group later split into smaller planning groups corresponding with these color codes. (This emphasis on risk is important as it relates to a ritualistic hierarchy of sacrificial behavior — and the difficulty of honestly critiquing this group pattern from within the group. Further explication of this point will be saved for a future post.) END_OF_DOCUMENT_TOKEN_TO_BE_REPLACED

“The attribute ‘utopian’ does not apply to political will in general, but to specific wills which are incapable of relating means to end, and hence are not even wills, but idle whims, dreams, longings, etc.”

In late October my cousin came down to Liberty Square (Zuccotti Park), then home of Occupy Wall Street, to meet me for a drink. He arrived about 20 minutes early so he could check things out for himself. My cousin and I both grew up in farmhouses outside of the very small town of Bird In Hand, PA. He has lived in New York for a few years now. I was eager to hear his impressions about Occupy Wall Street.

“What stood out to me,” he told me at a bar around the corner, “was how you all are recreating society — or creating a microcosm of society. It’s all there: a kitchen, a medical tent, a security force, a public library, and a whole alternative decision-making structure. It’s fascinating!”

Much has been made about the prefigurative aspects of Occupy Wall Street and the occupy encampments across the country. These spaces have served as more than just a protest, more than just a tactic. Participants are consciously prefiguring the kind of society that they are striving to build. In the two months of the physical occupation of Liberty Square, newcomers could walk up off the street and speak up during a General Assembly meeting, if they felt so moved. Everyone’s participation was welcomed. A modified consensus decision-making process is used in the General Assembly and in working group meetings — so that decisions have to take into account everyone’s input and ideas.

While I believe that consensus-building is important in democratic grassroots organizing, for me it’s much more of a guiding principle than a replicable formula that should be spread with missionary zeal. When I arrived to help with Occupy Wall Street in early October, the decision-making structures and culture were already established. I am intimately familiar with these kinds of processes. I even lead workshops on consensus decision-making. But I’m not as enamored with process as some folks are. Frankly, I’ve often found much of our process deeply dysfunctional. I take that in stride and with patience; social movements are messy and it takes a while to figure out good and functional processes for democratic decision-making and accountability.

What’s striking is how these processes and rituals have come to stand in for a strategy for many folks. Particular forms of process — from mic-checks to sparkle fingers — have become confused with political content (i.e. goals or a platform). And what’s true for process is also true for our tactical repertoire. Occupation of public parks is for many participants an end unto itself; the tactical form is confused with — or eclipses in importance — political content. It sometimes feels as if the reason we’re here is for our processes and tactics, rather than for the changes we hope to bring about with these as our means.